Meet Anoxolo, one of the liveliest students in our January-July 2018 Evangeline Life Skills Class. 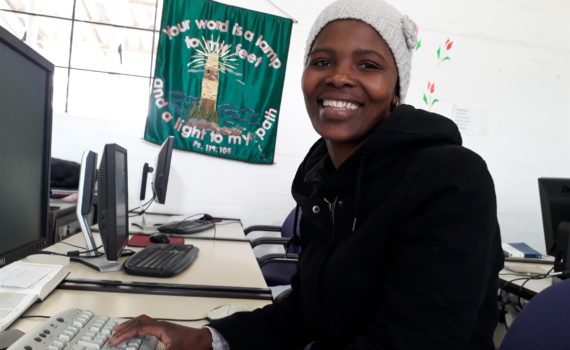 Meet Anoxolo, one of the liveliest students in our January-July 2018 Evangeline Life Skills Class.

One of the few students who were born in Cape Town, Anoxolo survived tragedy at the age of ten when both her parents were killed in a taxi accident that almost claimed her life too. During the fire that engulfed the taxi, Anoxolo was badly burned with terrible scars today that cover most of her upper body and arms, and which, from time to time , require hospitalization. Raised by her grandmother, Anoxolo moved from another township to Masiphumelele to live with a relative who supported them. Although she did not pass her high school exams, she was accepted in a special fire fighters program in one of the national parks. When that program ended she was accepted in a library program to read to children in English and Xhosa, something she sill does every week. Because her grandmother sewed her clothes, Anoxolo was keen to learn sewing and since she had never had the opportunity to have computer lessons, she readily came to Evangeline when a friend told her about the program. “I want to learn to do English better, ” she said. “” I want to sew school uniforms and I want so much to learn the computer.” Anoxolo recently lost her thirty five year older sister, but has not missed class because of this recent grief. grateful for this chance she now has. “I am very happy to be here,” she says.

Your donation gives a future and hope to an impoverished woman, her family and community!